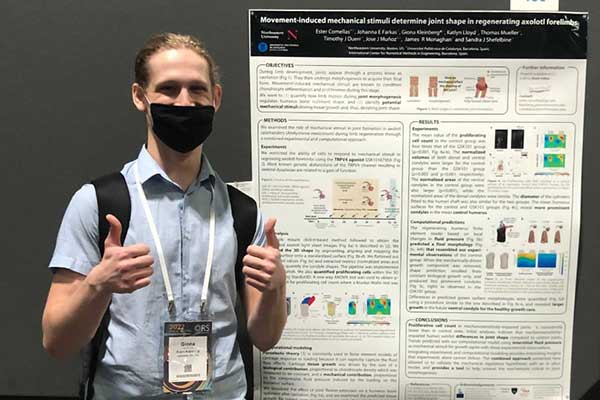 When one chooses a career, it makes sense that career should match one’s individual interests. But what if a person has multiple interests and goals, is it possible for one path to include them all?

For Giona Kleinberg, E’23, the answer is yes. He believes his combined bioengineering and biochemistry major gives him the freedom to work in multiple avenues. “I have so many interests, like engineering and biology, and my major allows me to pursue all of them,” Kleinberg says.

Besides engineering, Kleinberg is also pursuing a minor in data science, which caters to his love for coding. “You can make the biggest impact if you pursue an interdisciplinary field,” Kleinberg says.

His wish to make a difference has inspired him to pursue an MD/PhD in Developmental Biology, which is a perfect fit for his research passions and desire to help people. “It’s cool to see how science and medicine can really improve the lives of others,” he says.

Kleinberg learned this firsthand during his experiences doing research at his co-op and on campus. During his co-op at the Sabatini Lab at Harvard Medical School, Kleinberg investigated hyperthyroidism and mania using mice, with a potential application for bipolar disorder. “We’re looking at how thyroid hormone influences behavior through a mouse model,” he says.

Another influential research experience came from his time at lab of Professor Sandra Shefelbine, mechanical and industrial engineering, jointly appointed in bioengineering, at Northeastern, where Kleinberg worked with the Mexican salamander. The animal (also called an axolotl) can regrow its limbs, so they were amputated and reimaged by members of the lab group. Later, Kleinberg would use deep learning algorithms to quantify the regeneration in the images for a computational model.

“In both these projects, we’re trying to understand how something works on animals first and see how it relates to humans,” he says.

Besides his lab work, Kleinberg is currently working on five papers, and has eight currently in submission. He has also presented his joint morphogenesis research at an orthopaedic research conference.

Kleinberg’s enriching lab endeavors, as well as his other research accomplishments, led to him being awarded the 2022 Goldwater Scholarship.

Aside from his research, Kleinberg keeps busy. His various interests and passions have led him to be involved in several activities and experiences, including working as a peer tutor, volunteering as a mental health crisis counselor and working as a scribe in the emergency department at Massachusetts General Hospital.

Although he has a full schedule, Kleinberg is grateful for the lessons and experience he is gaining, as well as the valuable connections he’s making as part of his pursuits. “It’s awesome having such a big support system here,” he says. “My mentors are a standout experience.”

Besides building faculty relationships, what advice does Kleinberg have for students interested in conducting research? “It’s OK to be overwhelmed,” he says. “Own up to your mistakes. I would say just do what you’re passionate about and find many opportunities to apply that.”