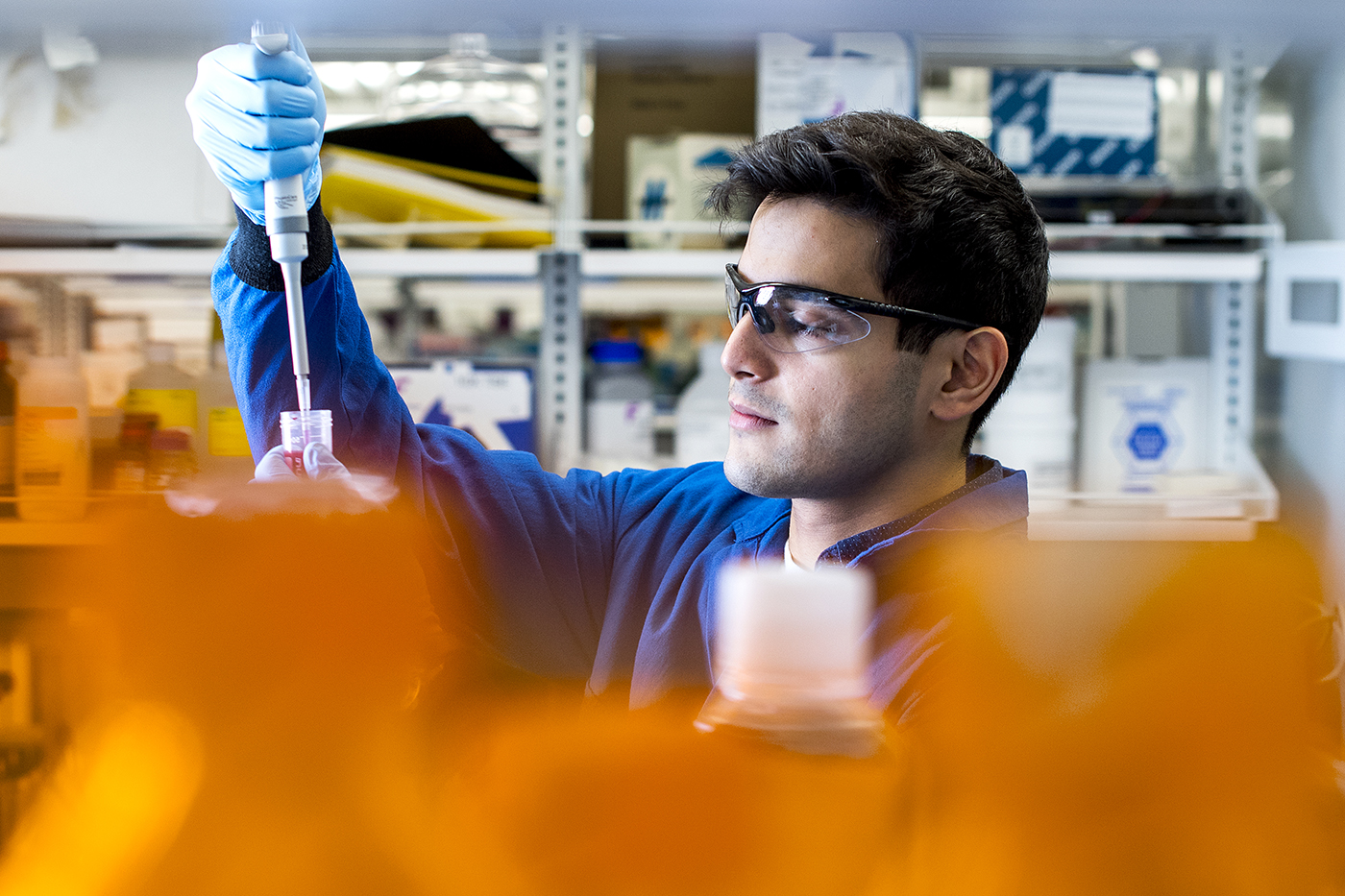 Minhal Ahmed, a fifth-year bioengineering student, was named the winner of the Harold D. Hodgkinson Achievement Award for 2019, one of the highest honors a senior can receive. In addition to his 4.0-grade point average, Ahmed has received the President’s Award, a Goldwater Scholarship, and the Mitchell Scholarship while at Northeastern.

He didn’t know it then, but the first time Minhal Ahmed discovered microbiota, he was 7. Star Wars Episode 1: The Phantom Menace was on TV and he found himself fixated on the screen as Jedi Master Qui-Gon Jinn performed a blood test on a young Anakin Skywalker.

Then at 17, as a freshman at Northeastern, he had an epiphany. He was watching Elaine Hsiao give a TED talk on mind-altering microbes, microorganisms that live in the digestive tracts of humans and other animals and contribute, studies show, to diseases ranging from inflammation to diabetes and even disorders such as depression.

He had a flashback of The Phantom Menace and Anakin’s impressive midichlorian count that led Qui-Gon to deem the apprentice “The Chosen One,” the prophesied Jedi who would restore balance to the Force.

“I felt it all come together: a crystallization of my worldview, my love for science, the metaphor from Star Wars,” he said. He thought of Islam, his religion, which literally means “submission.”

“Though religion seems to be at odds with science, surrender, to me, preaches the practice of science: the shocking science of these mind-altering microbes was the latest in a longstanding lineage of discoveries that have forced us to rethink our seat in the universe,” he said. “The microbiota were real-life midichlorians, a reminder of our hubris, a rebut of the dichotomy between mind and body, individual and community.”

Ahmed shares these reflections in a personal statement he submitted to the Hodgkinson Award committee at Northeastern, which recently named him as the winner of the Harold D. Hodgkinson Achievement Award. Considered to be one of the highest honors that a senior at the university can receive, the award is conferred to students for their character, personality, leadership qualities, co-op experience, and service in extracurricular activities.

Ahmed will be one of several honorees celebrated by President Joseph E. Aoun at Academic Honors Convocation on April 23. The annual ceremony recognizes students and faculty who have received prestigious awards for scholarship, research, or teaching over the past year.

As a bioengineering major, Ahmed has studied the gut microbiome—which refers to the bacteria, viruses, and fungi in the intestines—while working in assistant professor Abigail Koppes’ research lab. He has developed a microfluidic device—a plastic chip that has small channels in which to culture cells—that can be used to mimic how sensory cells in the gut communicate with the brain, which is a connection that has become an emerging area of study in recent years.

“Receiving the Hodgkinson Award came as an unexpected but pleasant surprise, and I feel nothing but grateful and blessed to deserve such an honor,” he said.

Ahmed, whose career goal is to become a physician-scientist, will head to Ireland after graduating from Northeastern to begin a master’s program in applied psychology at University College Cork and work in a world-renowned research lab that studies the gut microbiome.

In his endorsement letter, Lee Makowski, chair of the bioengineering department and professor of bioengineering, chemistry and chemical biology, praised Ahmed as a “star on the national level” and an exemplary student and individual.

“All of his mentors, supervisors, and professors are struck by his competence, engagement, and love of learning,” he wrote in his letter to the Hodgkinson Award committee.

The Hodgkinson Award is only one of many impressive accolades Ahmed has garnered during his time at Northeastern. He is also the recipient of the President’s Award, a Goldwater Scholarship, and the Mitchell Scholarship. To boot, he holds a 4.0 grade point average.

“I’m thankful to Northeastern for the people and opportunities that have helped me grow as a student, scientist, and human being throughout my time here,” he said.