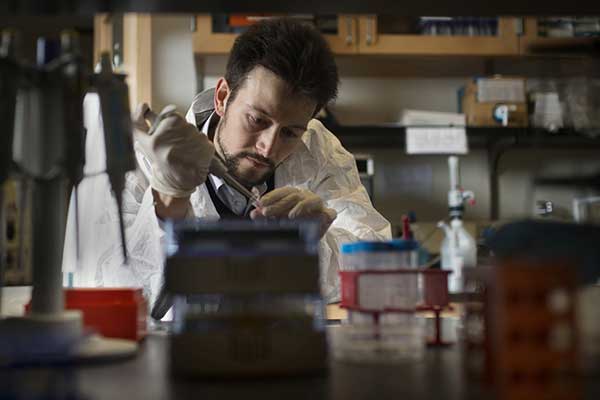 Bioengineering Assistant Professor Nikolai Slavov was recently named a prestigious Allen Distinguished Investigator, and was awarded a $1.5 million three-year grant to further his novel research on single cell proteomics. The Paul G. Allen Frontiers Group supports early-stage research with the potential to reinvent entire fields. Slavov is the first from Northeastern to receive the award.

The proteins in our cells are complex molecules working in synchrony. They orchestrate multifaceted chemical reactions resulting in the high-level functions that keep people alive and well, from growing tissue to fighting disease. Our bodies house thousands of different types of cells, which contain tens of thousands—if not millions—of different proteins.

With many proteins responsible for biomechanisms involved in crucial functions like the development of cancer cells, scientists need to increase the number of analyzed protein copies to thousands to capture single cell protein levels accurately.

With the new grant, Slavov will further his research in quantifying protein dynamics in single cells, which can help us better understand the exact sequence of signaling events that guide cells during development. “What I’m really most excited about is having the ability to carry out the research,” Slavov said. “What I have proposed is very ambitious, but also very promising.”

While there are many methods to measure single cells, all of these methods tend to measure only one snapshot of a cell, Slavov said. They capture the way a cell looks at one or two points in time. Computational approaches indirectly infer what the cell dynamics might be, but they’re indirect.

While there has been exciting progress in DNA- and RNA-based methods, with a certain degree of tracing cells, this is still only an indirect way to measure signaling mechanisms that regulate those changes. Slavov hopes to directly identify the signals that instruct cells to become different cell types.

“When we understand the signals, how they occur in normal development, we should be in a better position to ‘replay this music’ in stem cells, for example,” he said. “We could engineer cell types of specific properties, or engineer them for regenerative therapies.”

Working toward a brighter future

Slavov stressed that his immediate goal is to further basic research, continuing to learn more about what the proteins in specific cells do and how the methods can be replicated. But the research offers the potential for direct medical applications in the future.

“We could study how immune cells interact with cancer cells,” Slavov said. “We could have a single snapshot of an interaction and follow it in time. It could resolve longstanding controversies where we haven’t had direct data to determine what the mechanism is.”

“Allen Distinguished Investigators are pioneers who aim to upend how we ‘crack’ hard biological mysteries,” said Kathy Richmond, Ph.D., M.B.A., Director of The Paul G. Allen Frontiers Group. “Such technological breakthroughs could reveal the protein ‘drivers’ in disease and help further the development of more effective cancer therapies and treatments for autoimmune diseases.”

“I hope this novel research and its impact attracts more people to the emerging field of single cell protein analysis,” Slavov said. “There is a tremendous amount of potential in this field, but currently there are not enough people to develop it to its full potential.”

The Paul G. Allen Frontiers Group, a division of the Allen Institute, is dedicated to exploring the landscape of bioscience to identify and foster ideas that will change the world. The Frontiers Group recommends funding through award mechanisms to accelerate our understanding of biology, including: Allen Discovery Centers at partner institutions for leadership-driven, compass-guided research; and Allen Distinguished Investigators for frontier explorations with exceptional creativity and potential impact. The Paul G. Allen Frontiers Group was founded in 2016 by the late philanthropist and visionary Paul G. Allen. For more information, visit allenfrontiersgroup.org.

Related Story: Proteins do a lot more than build muscle. Here’s how we can understand them better