Approaching Research From a Different Perspective 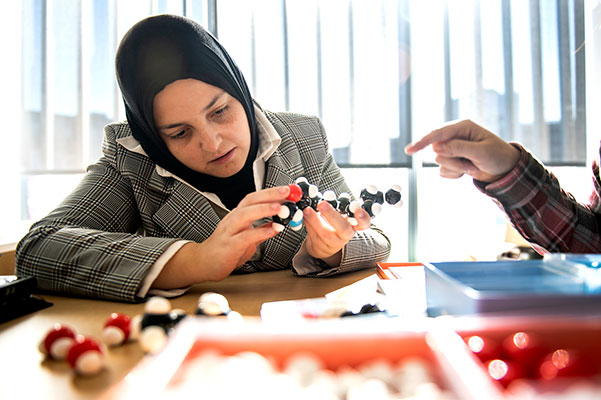 BioE Assistant Professor Mona Minkara, who has been blind since she was seven, has learned to approach research from different angles which is helping her determine how vaping affects lung function.

She realized that her blindness was a strength

Photo caption: Mona Minkara, assistant professor of bioengineering in the College of Engineering, holds a model of a molecule. Photo by Ruby Wallau/Northeastern University

Mona Minkara stood on a train platform in Johannesburg, South Africa, tapping at her phone in frustration. The GPS was malfunctioning and the device’s automated voice kept repeating that there was no transit information available.

Minkara, a newly appointed assistant professor of bioengineering at Northeastern, has been blind since she was seven years old. She was in Johannesburg filming the first part of a documentary series demonstrating how she navigates public transportation around the world.

“I always tell people I can’t wait to get lost,” Minkara says. “Sometimes society tells you, ‘You’re blind, so you can’t do this.’ So my freedom matters so much to me.”

In July, Minkara was awarded the Holman Prize by LightHouse for the Blind and Visually Impaired, which is given to individuals who are blind and want to push their limits with some sort of groundbreaking adventure. The award is named for James Holman, a blind, Victorian-era explorer who spent years traveling the world alone and successfully circumnavigated the globe.

As with Holman, Minkara’s adventure is rooted in solo exploration. She started with a trip to Johannesburg in October. In December, she will fly to London, and explore Istanbul, Singapore, and Tokyo before returning home. She is traveling with a videographer, but the woman is not allowed to help her in any way other than by filming what happens.

The footage will be made into a five-episode documentary series called Planes, Trains, and Canes, which will be released on YouTube in 2020. Minkara intends the series to show how blind people deal with different public transportation systems, and that adventure is possible for anyone.

“It gives me a sense of freedom, to be in a city that has good public transportation,” Minkara says. “It means I can do my own thing for myself. That’s huge.”

At Northeastern, Minkara is using her background in computational chemistry to study molecules that reside on the inner surface of our lungs, called pulmonary surfactants. They reduce the surface tension of water, which allows our lungs to expand more easily, helping us breathe.

Minkara will be modeling this substance at the molecular level. Her work could help researchers understand how vaping affects our lung function, as well as lead to better treatments for diseases such as respiratory distress syndrome.

To do her research, Minkara works with access assistants who take notes, proof-read publications, and trace the shape of plots on the back of Minkara’s hand, so she can understand what they look like. Their assistance is invaluable, Minkara says, but she hopes blind researchers will have more tools in the future, such as tactile plots or braille displays, that could provide tangible access to the different images they are working with.

Minkara has both human and technological assistance to help her conduct research into pulmonary surfactants, molecules that reside on the inner surface of our lungs and help us breathe. Photos by Ruby Wallau/Northeastern University

Minkara, who grew up watching The Magic School Bus and reading stories of Sherlock Holmes, knew she wanted to be a scientist. Her blindness didn’t change that goal.

“I actually started out undergrad wanting to be a surgeon,” she says with a laugh. “I remember having a conversation with the pre-med advisor saying something like, ‘Would you want a blind person cutting up your brain?’ And I thought, ‘Hmm, maybe we’re not ready yet, as a society.'”

Instead, Minkara pursued computational chemistry. When she took a postdoctoral position at the University of Minnesota, her advisor, J. Ilja Siepmann, helped Minkara realize that her blindness was actually a strength in scientific research.

Siepmann pointed out that being blind had taught Minkara to think differently and solve problems in creative ways. He wanted her in his lab because those skills would help her approach research questions from different angles, and see things that a sighted person might miss.

“It just floored me,” Minkara says. “It was the first time in my professional life in which somebody saw my blindness as an asset, when I had felt like I needed to keep on running to keep up with my peers.”

And she envisions a future with a lot more blind researchers.

“There are a lot of hurdles, but I personally feel like they’re worth overcoming,” Minkara says. “I want to be there for kids that are trying to be scientists and are blind. Or really, any kid that is trying to do something that society thinks they can’t.”