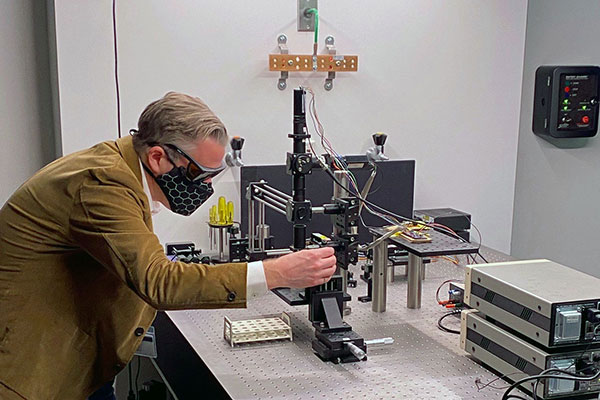 We’ve all seen watches and step counters that can show your heart rate. They do this by shining a light on your skin and detecting the small surges in blood flow that occur with each heartbeat. Now, imagine if we could use a similar wearable to detect cancer cells in the blood.

This is one of the ultimate goals that Bioengineering Professor and Associate Chair Mark Niedre and Bouve/ChE Distinguished Professor Mansoor Amiji’s research may make possible. In fact, they recently earned a 2-year, $400K grant titled “Fluorescence Molecular In Vivo Liquid Biopsy of Circulating Tumor Cells” from the National Cancer Institute and National Institutes of Health to help advance this research.

But, to get there, let’s take a step back.

One of the many things that makes cancer so dangerous, and often deadly, is not the original tumor itself. When most people die of cancer, it’s not from the original, or primary, tumor, it’s from the spread of that tumor to other organs and tissues of the body. This spread is called metastasis, and it often happens via the bloodstream — the tumor cells get into the blood, and circulates to other parts of the body.

According to Niedre, something like 90% of cancer deaths are ultimately caused by metastasis.

“Once cancer spreads, it’s very difficult to control,” Niedre explains. “CTCs [circulating tumor cells] can move through the blood and wind up elsewhere. It isn’t unusual, for example, for a tumor to start out in the breast and wind up in the brain, bones, or in the lungs.”

Currently, the method for detecting CTCs involves a liquid biopsy, where you extract a small amount of blood, about 7.5 milliliters, and try to see tumor cells under a microscope.

“If you see tumor cells in the blood that means it’s spreading,” Niedre says. “That’s bad news. It means the tumor may be more aggressive, and it’s associated with lower overall survival.”

There are serious drawbacks to this method, though. First, it’s a very small blood draw: 7.5 milliliters is about half a tablespoon, and an adult human has about five liters of blood. So, it’s challenging to make a conclusive diagnosis on such a small sample of the overall blood volume. And then there’s the fact that the number of cancer cells present is such a tiny percentage of any sample.

“These tumor cells are really rare. You get maybe a few per milliliter of blood, and your blood has literally billions of cells per milliliter,” Niedre says. “So there are very few of them.”

That’s where Niedre and Amiji’s research comes in: with a wearable, or a test at your doctor’s office or hospital, that can scan the blood optically — as the cells go by, directly in the body.

“It’s hundreds of milliliters of blood running through these vessels in a minute,” Niedre explains. “So you could theoretically put on some sort of wearable on your wrist and you could sample the whole blood volume continuously. That’s the vision and the dream.”

The team has been doing this in mice for years, but transitioning to humans presents new challenges. First, is coming up with a contrast agent — the material that will bind to and “label” cancer cells to make them detectable.

The team is on the way to solving this issue by using a contrast agent already in use for fluorescence-guided cancer surgery. The team got the idea with the help of Dr. Philip Low from Purdue University and On Target Laboratories, whom Niedre met at a conference.

“We thought, ‘Maybe this will work to detect cancer cells in the blood,’” Niedre recalls. “We tried it out and it works really well.”

With that problem virtually solved, Niedre can focus on perfecting the optics, making the device as sensitive, and able to measure as much blood as possible. For example, you may notice that the watch that measures your pulse shines green light. Niedre and his team use red light, because it can penetrate further into the body.

With so much involved in such an important project, interdisciplinary collaboration is critical for success. That’s one of the ways Northeastern’s culture has helped advance the research. While Niedre is focused on optics, Amiji has expertise in tumor models and contrast agents. And if they need any other ideas, the Northeastern community can be a great resource.

“Our project is inherently interdisciplinary, and Northeastern is very big on that,” Niedre says. “It’s not at all siloed. People are very collaborative, rather than being secretive and protective.”

Eventually, this research could revolutionize how we detect cancer, catching it early and opening up a range of treatment options.

“What commonly happens is that people are treated, the cancer is gone, then a number of years later it shows up again. The idea is, you thought it was gone, but there was a low level of cancer left that started growing again. So, this wearable would pick it up as early as possible,” Niedre says. “The dream would be you have someone who has cancer, or has their cancer come back, and we’re able to detect metastasis as early as possible, ultimately improving many patients’ outcomes, and saving lives.”