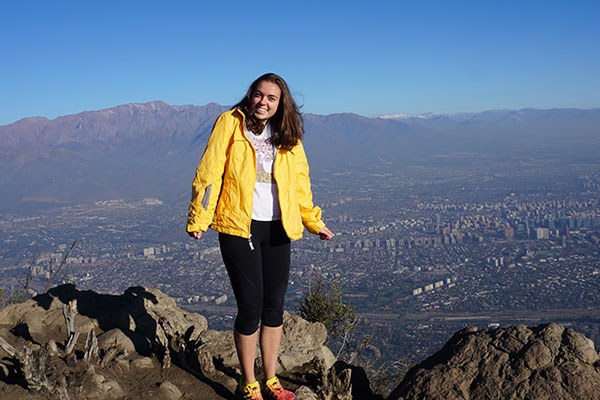 Main picture: Kerry Eller in Santiago, Chile as part of a self-designed co-op.

It might seem unusual that Kerry Eller discovered her passion for bioengineering during a month-long Dialogue of Civilizations to the United Nations in Geneva, Switzerland. After all, it was an international relations program with courses on disarmament and international law.

But in addition to her classes, Eller conducted independent research for a paper on global engineering.

“My paper was on the policy initiatives needed to create the infrastructure for bioengineering in low-income countries,” she says. “That’s what sparked my interest in the field.”

While at the United Nations, Eller also had an opportunity to talk with diplomats from around the world about the role scientists play in shaping international policy initiatives.

Eller will graduate this spring with a degree in bioengineering and a minor in political science, a combination that exemplifies Northeastern’s commitment to interdisciplinary education.

“I want to help create low-cost medical devices that are designed specifically for use in low-income countries,” she said. “But I want to do more than just the technical side of engineering. I also want to be involved in the interventions that make engineering in low-and-middle income countries possible. I’m interested in how engineering, politics, and global health interact.”

Eller chose Northeastern because the University Honors Program provided broad educational opportunities and made it possible for her to pursue her global engineering interests in Switzerland, Chile, Uganda, and Ethiopia.

Extracurricular activities also played a big part in Eller’s education. She went to Ethiopia as a member of Innovators for Global Health, a trip that planted the seed for her senior capstone project in which she and five other students are designing a low-cost wireless pulse oximeter with telemetry to replace the constantly failing equipment at St. Paul’s Hospital in Ethiopia.

She also traveled to Uganda as a member of Global Med to help female leaders of a grassroots organization improve water sanitation in their rural villages.

“I like the grassroots model of Global Med,” says Eller. “Their philosophy is the people who live there should identify their needs while we provide the financial resources to help them meet those needs autonomously. We’re there to support them, not tell them what we think is best for them.”

When it came time for her first co-op, the honors program funded her self-designed co-op in Chile, where she worked on two primary projects— a mosquito trap to track vector-borne diseases as they spread and a wearable pesticide monitor to gauge the exposure of agricultural workers to harmful chemicals. The challenge was that no one at the university was well-versed in the paper-based diagnostics that were to be used in the mosquito trap.

“That was my assignment, and so they expected me to become the expert and figure it out,” she recalls. “So I had to do a ton of research. I had to educate myself in a hurry about immunobiology.”

She also had to quickly improve her rudimentary Spanish, since neither her host family nor the researchers at the Universidad del Desarrollo spoke fluent English.

“I knew what I was getting into,” she says. “I purposefully threw myself into the deep end to force myself to learn.”

Eller and a fellow student currently have a paper on review at the Journal of Biomechanics which describes research they conducted on the impact of obesity on bone mechanics. Their research was funded by an Honors Early Research Award.

Following graduation this spring, Eller is pursuing a PhD in bioengineering at Duke University, which will be partially funded by the prestigious Truman Scholarship she won in 2020. She is also the recipient of the Harold D. Hodgkinson Award for academic and experiential excellence, one of Northeastern’s highest honors for graduating seniors.

Once she completes her doctorate, she plans to devote the early portion of her career to designing low-cost medical devices, then transition into a leadership role where she can influence policies that help low-income countries develop bioengineering capacity of their own.

“I plan to work from a ground-up perspective during the first portion of my career and from the top down in the second portion,” she says.