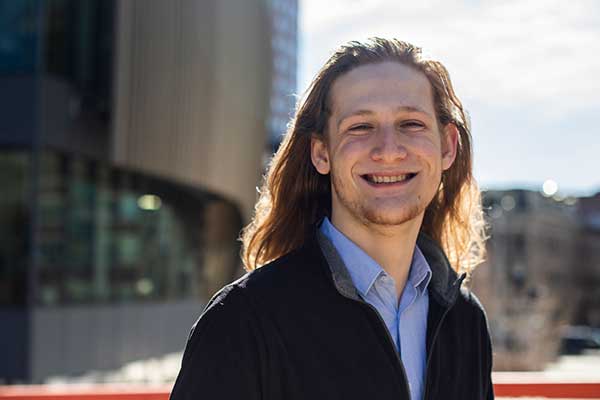 Giona Kleinberg, E’23, bioengineering and biochemistry, received the Barry Goldwater Scholarship, one of the nation’s most prestigious, merit-based awards for undergraduate students who plan to pursue research careers in natural sciences, engineering, and mathematics.

“These awards are a recognition of our ambitious, accomplished students and of our values as a university dedicated to experiential education,” says Jonna Iacono, director of Northeastern’s University Scholars Program. “These students are doing work that matters, and that’s why they stood out among the other applicants.”

Parazin, who will graduate with a degree in physics next spring, plans to obtain a doctoral degree in geophysics. Parazin’s research has covered both earthly topics and far-off concepts in space. Parazin has simulated the climate conditions of the Mississippi River during historic and recent floods and written programs that improve the functions of telescopes that measure gravitational waves.

“I want to highlight the great mentoring I’ve had as an undergraduate,” they say. “I’ve been fortunate to have some great guidance from some great professors, which allowed me to do some really cool research under their supervision.”

Kleinberg, who will graduate with a degree in bioengineering and biochemistry in 2023, hopes to eventually receive a doctoral degree and a doctor of medicine degree in developmental neurobiology.

At Northeastern, Kleinberg’s research has varied from studying the effects of thyroid hormones on behavior to analyzing the mechanisms that allow large salamander-like animals called axolotl to regrow organs. She currently works in the Shefelbine Lab at Northeastern.

“Winning this award means a lot to me,” Kleinberg says. “It feels like the culmination of a lot of hard work from myself and my fantastic mentors. It feels really good to be recognized for the long hours I’ve been putting in the last few years.”

Zlota, who will graduate with a degree in biochemistry next spring, plans to pursue a doctoral degree and a doctor of medicine degree in immunology and eventually become a surgeon-scientist.

During his undergraduate experience, Zlota worked at Boston Children’s Hospital with a team to develop safer pain-reduction therapies in response to the nationwide opioid crisis. Zlota also worked at the Dana-Farber Cancer Institute where he studied immunity against tumors and at Northeastern in The Monaghan Lab where he is currently investigating the relationship between the nervous system and the immune system.

“Receiving this scholarship highlights my desire to improve human health by studying biology and ultimately developing more effective therapies,” Zlota says. “It provides me the opportunity to join a community of highly successful and like-minded individuals.”

The Goldwater scholarship was created by the U.S. Congress in 1986 and named after former Senator Barry Goldwater, who represented Arizona in the Senate for 30 years and ran unsuccessfully as the Republican candidate for president in 1964 against President Lyndon B. Johnson.