Making Space Accessible to All 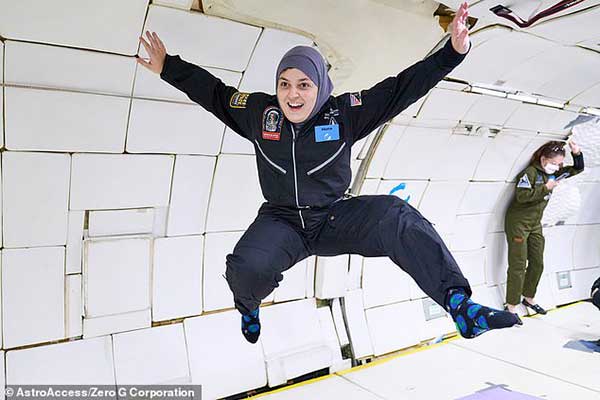 BioE Assistant Professor Mona Minkara participated in a zero-gravity flight with a crew of 12 ambassadors with mobility, vision, and hearing disabilities to test how spacesuits and vessels can be made more accessible. AstroAccess has a mission dedicated to advancing disability inclusion in space exploration.

People with disabilities have been locked out of spaceflight. But that is changing.

As the airplane tilted steeply upward, Mona Minkara experienced gravity like never before.

“It feels like a huge pressure is on you, and the skin of your face is being pulled over the bones of your skull,” she says. “It’s a really bizarre feeling.”

And then, as the plane reached the top of its arc-shaped path, those pressures of gravity lifted. Minkara began to float as her body was introduced to the feeling of zero gravity.

For Minkara, who is legally blind, such weightlessness could have easily been disorienting. “As a blind person, walking around, gravity is always a constant,” she explains. “You always know what’s down. You use your cane because it’s touching the floor. We can’t use a cane in zero gravity because it will just whack whatever all around you, and you don’t want to do that.”

That’s precisely why Minkara, an assistant professor of bioengineering at Northeastern who studies the molecules on the inner surface of human lungs, took to the skies last month. She was one of 12 disabled ambassadors for AstroAccess, a nonprofit initiative to make spaceflight inclusive for all. The team experienced weightlessness and tested out some specialized equipment aboard a parabolic flight with the Zero Gravity Corporation. The job of astronaut has long been restricted by government space agencies to people who met certain physical requirements, among other criteria. But with private spaceflight companies opening the door to space travel for a broader swath of humanity, AstroAccess endeavors to ensure that people with disabilities are included from the beginning. And that means the equipment needs to be designed for a range of accessibility.

“We’re getting in on the beginning steps,” Minkara says. “Just like anything, when you actually think of universal design and inclusivity from the beginning, it’s going to be so much easier and so much more effective than retrofitting whatever you produce at the end.”

To that end, Minkara and the other ambassadors performed experiments on the flight to assess how they might navigate a low-gravity environment. In particular, Minkara tested out three different devices that she might be able to use to help orient herself in a weightless environment.

One tool Minkara tested was an app that made her phone vibrate whenever she got close to something or someone while floating around. The second was an ultrasonic wand. It bounced sound waves off things in the aircraft—somewhat like a bat does with echolocation. The wand vibrated when something was in front of it. The third was a small telescoping cane with a fuzzy rubber tip.

With the cane, “when I tethered myself to the rope that they had attached to the cabin, I was able to use my other hand to understand the curvature or the texture of whatever the cane was touching—the ‘space cane,’ we’re calling it,” Minkara says.

The flight took several trips up and down, offering the passengers 20 to 30 seconds of weightlessness each time. The crew, including Minkara, laid on individual mats on the floor while the plane climbed. Then, after floating, they had to try to get back to their designated spots before losing weightlessness, using the various tools they were testing.

“We had like 90% accuracy” at returning to those designated spots, Minkara says. “Which is exactly what we need to show and prove that space travel is safe and these are maybe some things we can do for blind people.”

Minkara adds that more research and experiments will help improve some of the tools, but, “I can tell you that whenever I intended to go back to my spot, I went back. A few points towards the end, I was having too much fun and going to visit other parts of the plane, and so I was like, whatever … It was the coolest thing I’ve ever done in my life. That’s the honest truth.”