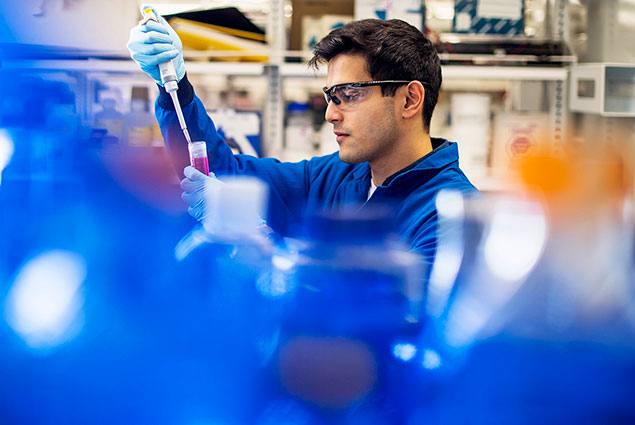 Bioengineering student Minhal Ahmed, E’19, was drawn to Northeastern by the University Scholars Program, the tight knit community, and extensive support for research and creative endeavors of which he took full opportunity of in the lab and on co-op.

Early on, Ahmed secured an Honors Early Research Award, and immediately began working in Assistant Professor Abigail Koppes’ Advanced Biomaterials for NeuroEngineering Laboratory (ABNEL) the summer after his freshman year. There he studied the enteric nervous system, or ENS, which is sometimes referred to as “the brain in the gut” for its reflexes independent of the brain. He studied the ENS because he eventually wanted to research its interactions with the gut microbiome.

He then received an Undergraduate Advanced Research/Creative Endeavor Award in 2017 for his research project at ABNEL entitled, “The Gut-Brain-Axis: Exploring the Interface Between Enteroendocrine Cells and the Enteric Nervous System.” As part of the project, he developed a microfluidic device, which is a plastic chip that has small channels to culture cells that can mimic the way sensory cells in the gut communicate with the brain.

All three of Ahmed’s co-ops involved research giving him experience in several areas. Following his interest in neuroscience, he first worked in Duke’s neurobiology department in an academic lab, leading a pilot project studying cerebellar circuit function during locomotion. Next, he was hired at a gene editing tech company, Editas, where he researched novel gene therapies based on CRISPR/Cas9 technology. And, for his final co-op, he decided to try his hand at clinical research at Massachusetts General Hospital. While looking up researchers in his field, Ahmed found a doctor doing research on the enteric nervous system.

“[He was] someone I wanted to get to know because he’s exactly what I want to be in the future—an M.D. who practices in the clinical, but also does research,” he said.

After sending the doctor an email, he was able to meet him and secure the position. “It was as easy as that,” he said.

Another large aspect of Minhal’s experience at Northeastern was his involvement with Peer Health Exchange, a student organization trying to combat health inequity by teaching health workshops at high schools in underserved Boston communities.

“I’m really passionate about empowering people to lead healthy lives,” he said. “I believe I can do that through research, but also through stuff like what Peer Health Exchange is doing.”

Through his work in the lab and on co-ops, Ahmed feels that his expansive resume will give him an advantage in his field.

“All of this experience really makes graduates from Northeastern especially competitive in research,” he said. Ahmed was recently one of only 12 students nationally selected as a George J. Mitchell Scholar, a competitive one year graduate program sponsored by the US-Ireland Alliance. He hopes to continue his research on the gut microbiome at University College Cork. He also received the 2019 Harold D. Hodgkinson Achievement Award—one of the highest honors a senior can receive.

Minhal was accepted to Harvard Medical School for fall 2021 after his return from the Ireland.