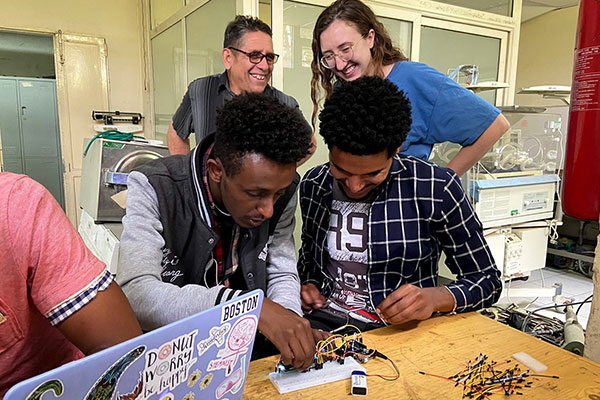 Students from the Innovators for Global Health student group spent their spring break in Addis Ababa, Ethiopia helping the second largest hospital in the country design low-cost medical devices that could be made and maintained with locally sources parts.

A hospital in Ethiopia needed new equipment. They fixed that.

Christina Carroll, a bioengineering student at Northeastern, teaches Arduino, a coding platform that allows for rapid prototyping, to a group of technicians, technical students, and engineers at St. Paul’s Hospital and Millennium Medical College. Photo courtesy of Caitlynn Tov

Surrounded by the hustle and bustle of the Merkato, the largest market in sub-Saharan Africa, Joe Iskander was searching for a few specific screws. He was essentially looking for a needle in a giant haystack.

The Merkato spans several square miles across the heart of Ethiopia’s capital, Addis Ababa. Iskander says the vendors at the Merkato sell “anything and everything you could think of.” It was the best bet for his mechanical needs.

Iskander, a bioengineering student at Northeastern, wandered the market for more than an hour. Iskander needed these screws to finish installing a surgical lamp at St. Paul’s Hospital and Millennium Medical College, the second largest hospital in the country. It was part of a spring break sojourn with four other students in Addis Ababa as members for Innovators for Global Health, a student organization that equips hospitals with low-cost medical devices created with locally sourced parts.

Erika Wheeler, Christina Carroll, Andrew Lopreiato, and Joe Iskander made up four of the five bioengineering students on the trip to Addis Ababa. It was part of a spring break sojourn as members for Innovators for Global Health, a student organization that equips hospitals with low-cost medical devices created with locally sourced parts. Photos courtesy of Caitlynn Tov

This was the organization’s second time in Addis Ababa. Ethiopia lacks access to many necessary medical devices, Iskander says. A 2011 study that examined more than 100,000 pieces of medical equipment in “developing countries” found that 80 percent of the equipment was donated. But, the overwhelming majority of the donated items were unusable after five years. And in Ethiopia, these devices often can’t be repaired because the parts are hard to find.

“They need devices that are designed for them that they can build on their own,” Iskander says. “Repairing equipment for someone fixes an immediate problem but it also causes problems later on. But, if you give someone the tools and instructions on how to build and repair it themselves, it prevents problems down the road, like if something breaks, they can fix it on their own because they put it together.”

During their first trip to Ethiopia in 2018, Iskander and his team surveyed doctors, nurses, and technicians at the hospital, and found they were in need of surgical lamps.

“The surgical lamps they had ran off the hospital’s power and the hospital lost electricity pretty frequently, so surgeons would be in the middle of surgery, the power would go out and they would essentially be operating blind,” Iskander says.

With that in mind, the team returned to Boston, and started designing and purchasing materials to build a new surgical lamp with the goal of bringing it back in 2020, and showing the technicians in Addis Ababa how to build their prototype.

Caitlynn Tov, another Northeastern bioengineering student on the trip, says she noticed the technicians at the hospital had vast technical knowledge, but lacked training on how to troubleshoot the issues they were having. So Tov ran a workshop that taught them Arduino, a coding platform that allows for rapid prototyping.

“The goal was to give them the basics of it so that they can get more advanced and eventually start designing prototypes for themselves,” Tov says.

These trips have become the inspiration for a bioengineering class that will be offered to senior students as the culminating experience of the program. Iskander will be among the students who will help the class through its pilot stages.

“It will be based on the same model as what we did for Innovators for Global Health,” Iskander says. “This summer, me and a couple of other students will be like the guinea pigs of the experiment, using the needs assessment from this past trip to come up with a project to work on for 2021.”

Tov says Innovators for Global Health will continue trips to Ethiopia while adding trips to other countries with hospitals in need.