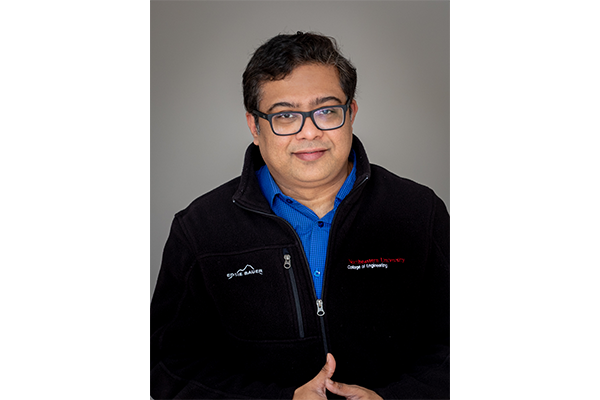 Assistant Professor Harikrishnan Parameswaran, of the Department of Bioengineering, received a $602K National Science Foundation CAREER award for “Elucidating the Role of Collective Cell-Matrix Interactions in the Mechanobiology of Airway Narrowing.” The research investigates the mechanisms that underlie a newly discovered phenomenon in the smooth muscle where cells can work together to sense contractile stimuli as a collective. In collective sensing, smooth muscle cells communicate with each other, using their force to modulate the frequency of intercellular calcium waves. By communicating with each other, the ensemble can completely change how each cell perceives contractile stimulus and the overall force it generates. The research seeks to understand the underlying mechanobiological interactions at the cellular level and their role in regulating airway caliber. This work can inform new therapies that target the airway’s extracellular components to provide relief for the millions who suffer from respiratory diseases like asthma.

He joined the Bioengineering department at Northeastern in January 2017. Prior to joining Northeastern, he was a postdoctoral fellow at Boston University. His research focus includes mechanobiology of the smooth muscle, intercellular communication in multicellular ensembles, and methods for targeting extracellular matrix for asthma therapy. Dr. Parameswaran earned his PhD in Biomedical Engineering from Boston University in 2009. He is the recipient of the K99/R00 and R21 awards from NIH.

Research for Better Treatment of Asthma

Any organ in the human body that requires constriction—such as the airways or blood vessels—is lined with smooth muscle that aids in its contraction. In asthmatics, the smooth muscle lining the airways undergoes exaggerated constriction in response to a small amount of inhaled irritants making it difficult to breathe. The exact mechanisms that lead to this behavior are unknown, making effective and universal medical treatment difficult.

Assistant Professor of Bioengineering Hari Parameswaran, who received a $602K CAREER Award from the National Science Foundation titled “Elucidating the Role of Collective Cell-Matrix Interactions in the Mechanobiology of Airway Narrowing,” seeks to understand how the smooth muscle detects inhaled irritants and generates force at the cellular level to develop better treatment for people with asthma.

In the airway, human smooth muscle cells are supported by a complex scaffold of proteins called the extracellular matrix. This extracellular matrix undergoes substantial changes in asthma. Parameswaran’s research discovered that when smooth muscle cells from healthy human donors are placed on a synthetic substrate mimicking diseased tissue, even a tiny dose of an irritant molecule is perceived as a high dose and causes an increased contraction response.

However, the most curious finding is that this abnormal reaction doesn’t occur in single smooth muscle cells, but only with a group of cells—meaning the cells are somehow communicating and responding to inhaled irritants as a collective.

“When inhaled irritant molecules bind to the smooth muscle, the smooth muscle cells communicate with each other using calcium waves,” says Parameswaran. “These calcium waves are frequency modulated—just like those used in radio communications—and, together like a committee, these cells decide how the amount of inhaled irritant molecules. This method of sensing inhaled irritants is fundamentally different from what is currently known. It brings up the intriguing possibility that the individual smooth muscle cell might not be at fault in asthma. Instead, the problem might be in how these cells talk to each other in an asthmatic airway.”

Parameswaran’s research team includes PhD students Suzanne Stasiak, Ryan Jamieson, Caroline McCormick, and Northeastern’s Professor Erin Cram from the Biology department. While they don’t fully understand the mechanisms that underlie the cellular communication process yet, they know that it relies heavily on mechanical forces transmitted through the extracellular matrix: When they mimic healthy extracellular matrix in their lab experiments, this hyperreactive communication stops.

Because Parameswaran’s research looks at the dynamic events occurring in cells in different environments, traditional histological slides won’t give him and his team the information they need. Instead, they plan to use the CAREER grant funding to develop new experimental methods to help them understand real-time mechanical interactions between cells.

Parameswaran’s goal for this work is to provide treatment for severe asthmatics for whom the only current option might be a dramatic therapy called bronchial thermoplasty, in which the smooth muscles of the lungs are heated up and thinned out—an often effective but daunting procedure.

“The idea that the extracellular matrix may have a role in regulating smooth muscle cells is new and exciting,” says Parameswaran. “If we’re able to understand better how the underlying matrix modulates intercellular communication, we may be able to learn more about what drives the disease of asthma and develop methods to target the cause and not the symptoms of this disease.”