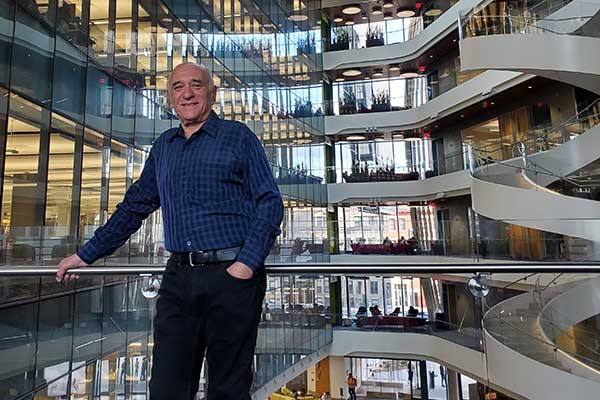 Distinguished University Professor Eduardo Sontag (EECE, BIOE; affiliate in Mathematics and ChE) is the PI on a $7.5M grant ($1.25M to Northeastern University) entitled “Rules of composition in synthetic biology across scales of complexity: theory and tools.” The grant is funded by the Air Force Office of Scientific Research under the Multidisciplinary University Research Initiative (MURI) program. In addition to Professor Sontag, the research team consists of MIT Professors Domitilla Del Vecchio, Jim Collins, Kate Galloway, and Michael Laub, as well as Caltech Professor Richard Murray.

Synthetic biology aims to program biology for applications, such as biosensing, smart probiotics, and regenerative medicine.  A major challenge to engineering synthetic biological circuits that behave as intended is the compositional context: Networks are not “plug and play” because behaviors of individual components change when other components are present. This forces a designer to re-optimize each component when other parts are added. The result is that circuits are designed in a monolithic fashion through brute-force parameter search, a lengthy process that is neither scalable, nor generalizable, and often leads to poor outcomes. Overcoming these challenges requires a rigorous, modular, and systematic design framework that explicitly accounts for the context-dependence of biomolecular processes and undesired interactions, which one tends to neglect in the design phase.

The goal of the new grant is to impact synthetic biology by changing the way one describes, characterizes, and designs genetic modules, through tools that will enable the systematic and scalable design of increasingly complex biomolecular decision-making systems. The core of the project will establish theoretical foundations and tools, grounded on the mathematics of dynamical systems, that will enable the compositional design of synthetic biology circuits while accounting for context. A control-theoretic framework will be developed for the composition of biomolecular processes so as to capture unintended connectivities due to the sharing of cellular resources in gene expression as well as a hierarchical design methodology. The theory will be validated through bacterial, mammalian, and cell-free testbeds to be developed by the experimentalists on the team.