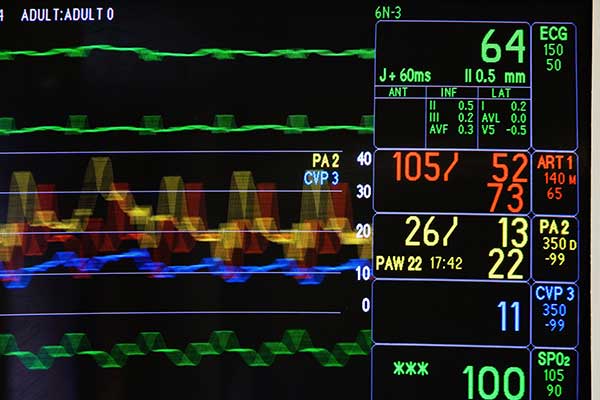 Bedside monitors in cardiac intensive care units measure everything from patients’ blood pressure and blood oxygen levels to their heart rate and rhythm.

The numerical and waveform measurements provide valuable information for doctors and nurses monitoring patients for immediate signs of distress. But once that information flashes across a screen, it is gone forever.

What if the data could be captured and crunched in real time?

10/04/22 – PORTLAND, ME. – Rai Winslow, director of life science and medicine research at Northeastern’s Roux Institute, is leading a research project at MaineHealth that will capture and crunch data from ICU monitors to identify cardiothoracic patients at risk of adverse outcomes. Winslow is a national expert in computational medicine. Photo by Alyssa Stone/Northeastern University

Could big data help predict which patients might be susceptible to infections that could lead to potentially deadly sepsis?

Could it identify patients who are at heightened risk for readmission?

Raimond “Rai” Winslow, a national leader in computational medicine based at  Northeastern’s Roux Institute in Portland, Maine, thinks so.

He is a principal investigator in a research project being conducted with MaineHealth that aims to take complex data sets about patients in the state’s largest cardiothoracic ICU and translate them into metrics that could better predict adverse outcomes—in time for physicians to avert them whenever possible.

The project is known as HEART for Healthcare Enabled by AI in Real-Time  and is funded in large part by Northeastern University’s Impact Engine program.

“The goal of HEART is to use machine learning models to collect data from patients while they are recovering in the CT ICU, and at every moment of time a new measurement comes in to predict their risk for developing a complication,” says Winslow, director of Life Science and Medicine Research at the Roux.

Twenty percent of cardiac surgical patients develop complications, and of those patients, 20% do not survive, he says.

Physicians can use the level of risk assigned to patients by computational medicine to determine which patients need more intense treatment and which are doing fine, he says.

“The idea being that if you can make this prediction in advance before the complication has actually occurred you can intervene and help with it.”

Winslow says he started working on the HEART project about a year ago, after coming to the Roux Institute from the Johns Hopkins University School of Medicine, where he was the founding director of the Institute for Computational Medicine.

He says he expects to enroll recovering cardiac surgery patients in MaineHealth’s 12-bed ICU in clinical trials in 18 months.

But first the researchers have to develop a model of the cardiovascular disease process using large patient datasets and animal models of disease.

The next step is to take streaming data from individual patients, send it to the cloud for de-identification, and analyze what the data bodes for the patients’ recovery.

“We use machine learning methods applied to population data to learn an algorithm that could reliably select patients with sepsis who are going to develop septic shock,” for instance, Winslow says.

If the estimation of developing the often-fatal syndrome is 90%, physicians likely will take a different approach than if the risk for a particular patient is 20%, he says.

The final step is to find a way to deliver the information to medical staff in a digestible, timely format, Winslow says.

“We don’t tell (physicians) what to do, what interventions to take,” he says. “We’re simply notifying them that that patient is headed toward a complication. ‘Use your knowledge and your savvy and your intuition and your experience to treat that patient as you see fit.’”

“Some of their patients have multiple infusion pumps for medications, as well as ventilators, mechanical support and continuous hemodialysis,” says Kramer, who is also a surgery professor at Tufts School of Medicine.

“In the future, having machine learned predictive analytics fed back to the bedside in real time has the potential to enhance the sophisticated management currently being given,” he says.

And that affects a hospital’s bottom line, since the Centers for Medicare and Medicaid Services alters reimbursement rates based on hospital readmission rates, Winslow says.

The prospect of medical heavy hitters joining HEAR comes as no surprise to Gene Tunik, associate dean for research and innovation at Northeastern’s Bouve College of Health Sciences, who calls Winslow’s appointment at the Roux “a game changer.”

“It’s a huge feather in our cap. He’s such a big figure in computational medicine. It’s just fantastic that he’s at Northeastern.”

Tunik is leading a post-ICU phase of the HEART project, which involves using the computational medicine model to predict how well the MaineHealth cardiothoracic surgery patients do farther along in the recovery process.

“The trajectory of their care doesn’t stop in the ICU. In the later stages, rehabilitation services become very important,” says Tunik, who is also the director of AI Plus Health at Northeastern’s Institute for Experiential AI.

Winslow says he sees the predictive service eventually being made available to all hospitals, big and small, With data being computed on the cloud, he says, “it means a community hospital doesn’t have to invest in a huge infrastructure.”

Winslow, who was born in Portland and grew up a few miles away, says he’s impressed by how MaineHealth has been quick to respond to new intellectual and practical challenges in patient care.

“I was at Johns Hopkins for 30 years and was very happy there. I left and came to the Roux for a number of reasons. One is I thought the Maine healthcare system was something special.”

“It has very high quality clinician researchers and clinicians. It can attract faculty nationally. They’re hungry. They’re eager to make their institution better and make it a well-known academic research center.”

“They really want to see this technology in the clinic, helping their patients,” Winslow says. And it’s not just physicians. “The nurses and technicians I’ve spoken to are all excited about this. Everybody is.”